St Mary's Holy Assumption Russian Orthodox Church was established in Stamford in 1913 by immigrants from Eastern Europe, mostly from the Russian Empire. For several years before that, a group of Orthodox faithful held services in private homes with visiting priests serving the Liturgy.

In the early 1970's, a large tract of land, right off the Merritt Parkway, was purchased for a new church. After again attending Divine Liturgy in several temporary places, parishioners celebrated the first service in their new church in 1977.

Our parish is part of the Orthodox Church in America (OCA). OCA is an autocephalous Eastern Orthodox church in North America. Its primate is Metropolitan Jonah (Paffhausen), who was elected on November 12, 2008, and was formally installed on December 28, 2008.

The OCA's headquarters are located in Syosset, New York. OCA consists of more than 700 parishes, missions, communities, monasteries and institutions located primarily in the United States and Canada. Additional parishes and missions are located in Mexico and Australia.

To learn more about OCA, visit their website and Wiki article.

OUR PASTOR
We are pleased to have Father Vladimir Horoszczak as our spiritual leader.

Fr Vladimir, Matushka Anna, and their children Jerry and Anya have been with us since June 1996, upon Batyushka's completion of studies at St Tikhon's Seminary. 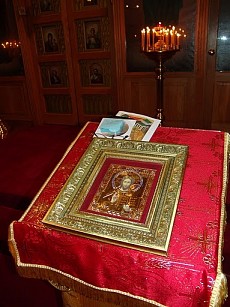